Fed Official Skeptical of the Need for a "FedCoin" CBDC

We have reported here for some time that despite constant speculation about the Fed moving towards a so called FedCoin CBDC (Central Bank Digital Currency), we did not see any evidence such a thing was on the horizon any time soon. Now we have a Fed official questioning why they need one at all as quoted in this article in Yahoo Finance. This fits with all the other evidence we have seen and direct input from experts in the field. Below are a couple of excerpts from the article.

"A top Federal Reserve official on Monday advocated against creating a digital version of the U.S. dollar, questioning the use cases and security of a Fed-issued digital currency.

The Bank for International Settlements (BIS) recently issued this update on global efforts to move forward on CBDC's. While it tries to paint a positive picture about a future for CBDC's, it also lists lots of obstacles and notes that only a handful of central banks have moved beyond just studying the pros and cons. The BIS report also states there are no plans to replace cash and it's just as likely central banks might try using a wholesale version of CBDC's which the public would never see or use just to move money between banks easier. While there is lots of speculation about CBDC's, if you read the actual reports and studies on them, they always list lots of obstacles to overcome and always talk about them as a long term horizon event. Here, the Fed indicates they haven't even decided if they even want a CBDC.

Added note: CNBC offers this more detailed article on these comments. Here is an excerpt:

Posted by Larry White at 9:06 PM No comments:

Former IMF official Dr. Warren Coats offers a new article on the prospects for Bitcoin to function as a currency. He also describes what he believes would an "'ideal monetary regime" in the article. Below is an excerpt from that part of the article. 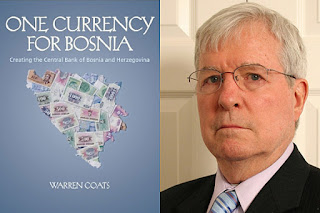 "The ideal monetary regime is to fix the value of currency to something (such as gold, or a basket of currency as in the case of the IMF’s SDRs, or a small basket of widely traded commodities) and then allow the public to adjust the supply to match its changing demand for that fixed value. Such a system follows currency board rules. The central bank passively supplies or redeems its currency in response to the public’s demand at the fixed price. Such a system has been adopted by several countries as is described in detail in my book on the creation of the Central Bank of Bosnia and Herzegovina.  [“One Currency for Bosnia-Creating the Central Bank of Bosnia and Herzegovina”]"
Click here to read the full article