Blast from the Past -- Notes from former BIS President Dr. Jelle Zijlstra

I have noted that I get some great emails from readers here pointing me to interesting articles and information. In this article I would like to feature an example. A reader here sent me this link which leads to some fascinating historical reading from the notes of a former President of the Bank for International Settlements. Here are the lead paragraphs from this blog article which provide some background on Dr. Jelle Zijlstra:

"On this webpage you can read a selection of translated and English writings of the late Dutch central banker, President of the Bank for International Settlements, renowned Dutch economic scholar, former minister of Economic Affairs, minister of Finance, Prime Minister, and last but not least, member of the European Advisory Board on Economic and Monetary Integration (since August 1991), Dr. Jelle Zijlstra (1918-2001). Also a minister of State after his active career, Jelle Zijlstra was one of the Netherlands’ finest Statesmen.

What Jelle Zijlstra shares in his analyses will be (entirely) new for some, while for others it underlines what they have explained years ago, and that others do nowadays. Either way, Zijlstra’s unique and lucid clarification of the monetary events as they occurred during his time in office is one of which I think, we can be in awe of."


Below is an  excerpt from one of the articles. As stated in the paragraphs above, these notes from a former President of the BIS provide an interesting glimpse into the past looking at events from his perspective. I selected just one tidbit from a 1992 article. I encourage readers to take a look at the entire set of articles from Dr. Zijlstra. They are truly fascinating given the source. Keep in mind these notes were written many years ago, but they give us a window into the past from a very unique perspective.

"When I [stepped down from BIS] at year end 1981 in Amsterdam as well as in Basle I realized that I would miss the latter city most. Of my farewell, I like to share an anecdote. Back then I was already somewhat critical about that new international money, created out of thin air, the SDR. I thought the American love for that was suspicious. I suspected that they wanted to push gold away, only to later have this new toy abandoned [as a museum piece[9]]. Paul Volcker, who had succeeded Burns as chairman of the Board (Federal Reserve) in Washington, presented me with a specimen of the SDR, that is, a fictitious specimen, because in concreto, the SDR never existed as a real bank note. His gift became a lasting memory of the feelings on both sides: It will never be something, respectively; it may never be something with the SDR." 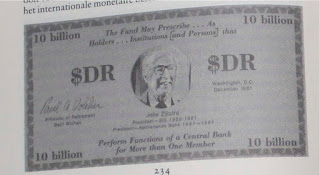 "I spoke about the IMF several times, that most important institution, once destined to supervise the effective functioning of the international monetary framework, and to put forward rules for the monetary behavior of member states; possibly the beginning of a global central bank. It ultimately did not come this far. In our world of free, market driven exchange rates, the IMF is only a ghost of what it once was. The annual meetings, once of utmost importance, captivating and often rewarding, have subsided into almost folkloristic meetings. My first annual meeting was in 1959 in Vienna just before I became minister of Finance. Dr. Holtrop was still President of the Dutch central bank. He gave there one of his renowned speeches. The number of member states of the IMF then was still limited; we were able to really discuss matters. My memories on the many annual meetings of the IMF that I witnessed as Bank-president increasingly narrow down to the enormous Sheraton Park Hotel in Washington; a conference room with several thousands representatives and special guests, listening to countless speeches, or partially listening since the texts were provided simultaneously.

After the first speakers on the first day (the big nations) nobody was [interested any longer]. People were visibly longing for lunch and in the afternoon it was a dead-alive business. In the late afternoon, gigantic limousines came on and off for the joys of the meeting: the cocktail-party’s, [and] consequently, dinners. Of the expenditures of such a meeting it would be possible to soothe a significant part of the destitution of a poor country. In so far formal decisions had to be taken they were largely hatched upfront. Communiqués were, except for points and commas, arranged beforehand. The IMF has ended up in a situation of slumber from which it can only awaken if there is chance for restoring the international monetary order. This view is however not unfair, then yet incomplete. The International Monetary Fund has since the two oil-crises in an increasing degree taken upon it a very important task, namely as relief worker for poor countries, among other by taking supervision over attempts to find solutions for the often sky-high debts of these countries. The ‘state of slumber’ relates to original role of the IMF as global monetary institution."  (excerpt from an article written in 1992, underlines are mine)
------------------------------------------------------------------------------------------------------------

My added comments: If you want to see how things look from the perspective of someone at the pinnacle of the monetary system these articles will interest you. Later in the article featured above, Mr. Zijlstra talks about events that would eventually lead up to the formation of the Euro. Notice how long many of the issues we talk about here (monetary system change) have been talked about and how long it takes for anything major to change.
Posted by Larry White at 2:33 PM