One of the most amusing things about following the topics covered here is when I see articles suggesting that central banks no longer view gold as playing any important role in the global economic/financial system. Of course, it is true that gold no longer plays any role in the monetary system directly as it did for many years. You cannot exchange Federal Reserve notes for actual gold at your local bank these days.


However, anyone who thinks central banks don't view gold as important is simply out of touch with the facts. This new article by Ronan Manly at BullionStar.com lays out those facts pretty clearly.

He simply asked the central banks around the world who own or hold more than 30,000 tons of gold why they own or hold it and most of them replied. Interestingly, the US did not reply. Below I have excerpted a bit of the concluding summary from the article.

"In their own words, the reasons central banks hold gold in large quantities are many fold, however there are consistent themes in the central banks’ explanations. Many of the respondents cited gold’s ability to be mobilized in a crisis, that ‘gold holdings can be activated in an emergency’, that gold is an ‘emergency reserve in a crisis’, ‘a contingency against unforeseen events’, a form of ‘insurance’, or as the Bank of England says ‘a war chest’ and the ‘ultimate asset to hold in an emergency’. As such, nearly all central banks referred to gold as a safe haven asset.

Many central banks mentioned gold’s high liquidity, and some referred to the ability to use their gold to raise liquidity in a foreign currency, even for foreign exchange intervention.

Gold’s role as a hedge against inflation was cited in a number of the central bank answers, which explains why central banks look to the gold price as a barometer of inflation expectations.

Many of the banks also pointed out that because of the unique attributes of physical gold, such as limited supply and mined into existence, gold does not have any counterparty risk or credit risk, and because it is not issued by governments, it has no default risk.

With such widespread support among the world’s central banks for holding physical gold, as a safe haven, as an inflation hedge, and as a form of investment diversification, their enthusiasm for gold in 2018 looks as strong as it has ever been in any decade of the modern era."

Please click here to read the full article on BullionStar.com

So we have the leading world powers (US, EU nations, Russia, China, etc) owning gigantic gold reserves (over 20,000 tons along with the IMF who owns over 2800 tons), but they don't view them as having any importance in the modern financial world? Amusing.

The next 40 countries making up the top 50 gold owners own over 6,800 additional tons of gold combined. Thirty five nations around the world own at least 100 tons of gold. But no one thinks owning gold is of any importance in the modern financial world? Amusing. 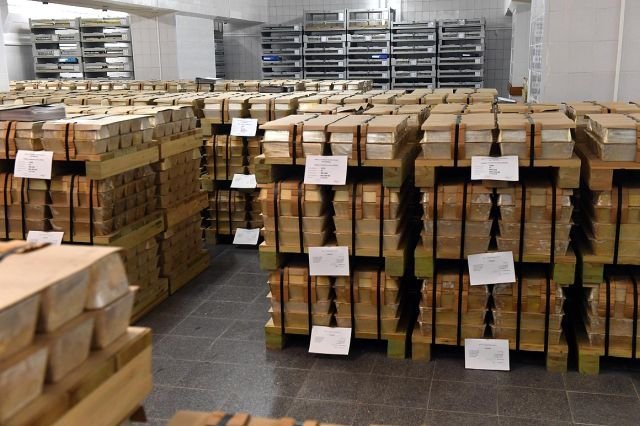 If true, this should remove this situation as something that could destabilize markets. I did mention this news to Jim Rickards and he is hopeful that it is real, but advises to continue to monitor the situation until more evidence surfaces to confirm it.