A Gold Related Item as the Fed Meets (Gold vs. US Dollar vs. Bitcoin)

With the Fed meeting this week here is an item I ran across recently related to gold. It is a graphic (see below) that compares Gold vs. the US dollar vs. Bitcoin in terms of "The Top Ten Traits of Popular Investments". Readers can review the comparison chart to see if they agree or disagree with it on the ten points of comparison. Below the graphic are some added comments. 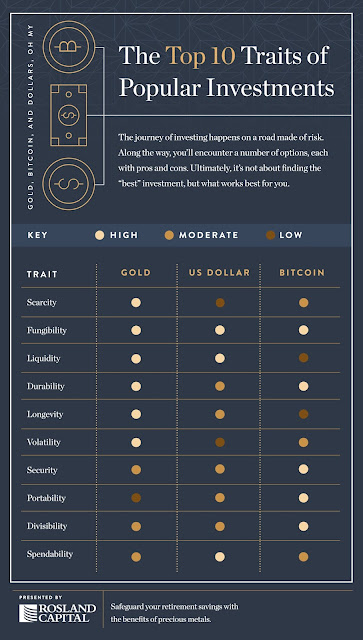 
My added comments: Readers here know that we do not expect that Bitcoin is likely to reach a broad base of users for the reasons listed in the article we published here last year. In regards to gold, we have stated many times here that readers should give consideration to how they might deal with another major financial crisis if we get one in the future. This might include creating an emergency fund that could include precious metals (gold and/or silver) for those who are able to consider that option. Some kind of plan is better than no plan just as having home owners insurance is better than not having it. It's a personal decision that will differ for each set of individual circumstances.

Reader comments on this chart are welcome below and also by email:


Added note: In another gold related article, the OMFIF issues a press release about their new report called The Seven Ages of Gold:

"Central banks are turning back to gold purchases in line with a century of practice between 1870 and 1970. This has restored the yellow metal as a central element of monetary management after four decades of attempted demonetisation, according to a new report from OMFIF."
Posted by Larry White at 10:09 AM