Mid Year Review - Where is this Blog Headed into 2018?

Amazingly, we are more than half way through another year. I started this blog in 2014 with an expectation that some kind of major reform or reset of the current monetary system seemed likely not too far into the future. Here we are over 3 and 1/2 years later and no such event has happened. A fair question to ask would be how much longer will I continue to write articles on this? What if Janet Yellen is right and we don't see a another new major global crisis in our lifetime?

As of right now, my thinking is to continue to monitor events and try to write fairly regular articles until mid 2018 when I can find relevant news to write about. I feel like by then it will be more clear as to whether there is much point to continue writing new articles. Here is my logic for that conclusion.

- Donald Trump will be well into the second year of his term. By then we should know if anything dramatic is really going to happen related to his ability to stay in office. I don't just mean something forcing him to leave office. I am thinking by then it should be clear if Congress has moved his agenda forward and if it is showing signs of working or not by then. The Republican Congress probably has to do this or face losing some level of control. At some point failure to move an agenda might impact markets and systemic stability.

- If by mid 2018 Trump has overcome all the obstacles placed in his path (including those of his making) to get his agenda passed and it seems to be working, it is unlikely that we would see anything happen to radically change the current monetary system. It is hard to imagine the public demanding that kind of major change if things are going well.

The primary signals I continue to watch pretty much stay the same. If the US stock market has not had any kind of sharp severe decline, the US dollar is holding up reasonably well (despite falling some this year), and gold has not made any kind of new sharp move higher (towards its previous high), I will assume that no new crisis is on the horizon and that Trump is likely to stay in office for 8 years along with a Republican Congress. In other words, nothing that would suggest major monetary system change is coming any time soon.

Looking back to the start of this blog, this is interesting to me. One of the first articles I wrote for this blog in 2014 was this one. It talks about the prediction made way back in 1988 in The Economist magazine that we would see a new major global reserve currency by the year 2018 (they named it the Phoenix and pictured a gold colored coin on the cover -see below). Time flies and now it's almost 2018. We'll soon see if that prediction holds up or not.

I do find it interesting that something like I have been writing about here for over 3 years now does appear to be coming soon. BullionCoin is a gold backed cryptocurrency that could function as a global currency and be used by anyone with a mobile phone. I had thought something like this might come from the IMF (perhaps a new kind of SDR for example) and would not be tied to blockchain technology. However, it appears this new gold backed currency will debut in the private sector instead. It will be interesting to see what kind of "sovereign and institutional support" there is for it. For anything to gain widespread public adoption, I think it will need strong support like that to help promote it. I plan to follow the BullionCoin story until its launch and beyond if it appears it may have a substantial global impact as an alternative currency. (update note 8-16-17: see news update on BullionCoin here)

note: I should add that I plan to leave this blog online permanently whether I stop producing regular new articles or not. The information in the links on the right panel of the blog (systemic risk warnings & monetary system reform ideas) will be available for anyone who can use it and most of the information will stay relevant over time. There really is a lot of valuable information collected from a variety of experts contained there and it did take a lot of time and effort to compile it all in one place.

The only reason the blog would not be available is if Google stopped supporting Blogger for some reason. There is no indication that will happen that I know about.


January 1988 Cover for The Economist 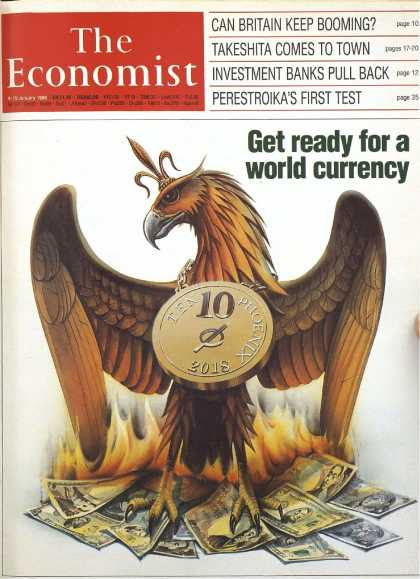