Now and then while doing research I run across some older information that is really interesting. This 2014 interview by Robert Pringle with former Fed Chief Paul Volcker falls in that category.

This interview provides a great window into the past (both long term history and recent history) from an icon in the world of central banking. I present it here for readers who have interest in these issues. Below is some text that describes the interview from Centralbanking.com 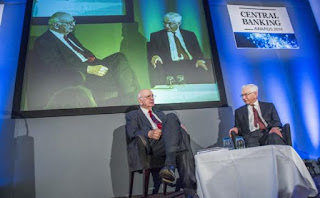 Former chairman of the Federal Reserve Paul Volcker believes the Federal Reserve has come in for unfair criticism related to its decision to ‘taper' its asset purchases late last year (see video above).
Volcker told an audience at the Central Banking Awards dinner on March 13 that he was perplexed by criticism of the Fed when it made a very small, even "tiny", move towards ending its purchases of US Treasuries and mortgage-backed securities. The Fed started to reduce its $85 billion of monthly US bond purchases in December last year. It now buys $55 billion of such securities per month.
In a ‘conversation' with Central Banking founder Robert Pringle, Volcker said there were complaints that other central banks should have "consulted" regarding tapering. But he said it was unworkable for the Fed to consult with every nation around the world when making its policy decisions. Volcker said volatile capital flows and currencies are a product of the structure of the current monetary system, rather than any actions undertaken by the Fed on tapering.
Volcker added that one of the issues in the lead-up to the financial crisis of 2007–08 was that huge imbalances built up in China and the US but "nobody wanted to do anything" about it, he said. "There was nothing in the system that made anybody do anything [to address the imbalances]," Volcker added. Asked if that was a system the world should operate with today, Volcker replied: "I don't think so", adding that "nobody is prepared to look at it".
Click here to watch the video interview
-------------------------------------------------------------------------------------------------------------------------------
My added comments: I hope readers who see this interview will appreciate even more the contributions that Robert Pringle has made to this blog. Mr. Pringle has been very kind to help out with explaining complex issues presented here and also to contribute to articles published here with direct comments. Please note that when Mr. Pringle offers us information, he is coming from a background of decades of experience working with central bankers like Paul Volcker. This kind of insight is very hard to find and much appreciated here.