Dr. Judy Shelton is the US Executive Director for the European Bank for Reconstruction and Development. She accepted the nomination for this position after a number of years as Chairman of the National Endowment for Democracy and Senior Fellow at the Atlas Network.

Dr. Shelton has long been an advocate for monetary system reform which is something we watch for here. While the world is now focused on the trade dispute taking place between China and the US, Dr. Shelton recently offered this comment on her twitter feed suggesting that perhaps this might be the right time to think about "a new international monetary system". In her comment, she refers to this recent article appearing in The Wall Street Journal.

Naturally, this comment from Dr. Shelton caught our attention so we reached out to her to see if she would like to offer some additional insight on it. She kindly agreed to a brief Q&A interview to provide some expanded thoughts on the subject. Below are her comments on the potential for monetary system reform offered for readers here. 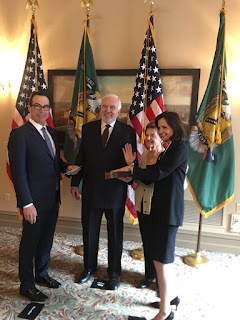 Dr. Shelton being sworn in as US Director for the EBRD by Secretary Mnuchin

Q: The world is focused right now on what some are calling a "Trade War" between the US and China. What would it take to achieve a "win-win" solution and how do you see the prospects for that outcome?

A: It is not a "Trade War" so much as an intense, behind-the-curtain focus on what has truly been happening with regard to having reciprocal access to the markets available in both countries and addressing the lack of a level playing field. Free trade is a wonderful concept and can be most beneficial to all participants--but it requires that there be no barriers to entry, no artificial constraints that prevent potential consumers from making voluntary choices, no forced sharing of competitive technology. So far it seems to me that the U.S. has the advantage in asking China and other trading partners to abide by both the spirit and the letter of free trade. Our willingness to go beyond mere rhetoric on this point underscores our commitment to the ideal.

Q: Both the US and China have used the tool of tariffs so far. Now some are asking if China may be intervening to devalue the yuan as another tool. You recently offered this idea on Twitter (should we think about a new monetary system?) My question is: Do you think that out of this trade dispute that we might see the opportunity arise for discussions on ways to reform and improve the monetary system?

A: Certainly, I am speaking only for myself in recounting my own long-held belief that a level playing field in the monetary realm is the only appropriate foundation for genuine free trade. The point of my 1994 book Money Meltdown: Restoring Order to the Global Currency System is that a new stable international monetary system is required to serve the needs of an open global economy with the goal of maximizing the potential for global prosperity. Tariffs can have an impact on trade flows, but financial capital flows are much more influential in determining economic outcomes. Why do we concentrate so much on tariffs when the effect of differential central bank decisions and exchange rate movements can easily offset whatever consequences were anticipated to be achieved through trade negotiations?

It seems to me that by identifying currency manipulation as an unfair trade practice, the next logical step would be to define a more appropriate exchange rate system that would prevent exchange rate shifts from undermining the terms of trade--not only for exports and imports, but also with regard to the distortions and malinvestment consequences that occur when financial capital flows are responsive to contrived monetary signals carried out by governments rather than genuinely productive economic opportunities.

Q: What should be the goal for any reform of the current monetary system?

A: Again, speaking for myself: the goal should be to preserve the sovereignty of individual nations within the context of an international monetary system that facilitates legitimate free trade by effectively determining a universal standard of value that can serve as a unit of account for evaluating goods and services across borders and through time. It may seem ironic, but the classical international gold standard was more far-sighted and sophisticated in achieving this goal than any approach we have since had; it delivered far superior results in terms of productive economic growth and shared prosperity through free trade and capital flows than our current mishmash of exchange-rate arrangements.

It makes little sense to have some countries intervene while others don't; to ignore the impact of central banks on exchange rates; to focus on tariffs while ignoring the problem of currency shifts that may overwhelm their impact. All the while, earnest businesses and individuals bring their goods to a supposed global marketplace to compete fairly--only to be confronted with unpredictable exchange rate movements that can turned legitimately-earned profits into currency losses. We need to embrace the sanctity of sound and honest money as the only logical  premise under which free trade and democratic capitalism can succeed around the world.

Added notes: Dr. Shelton has been an advocate for monetary system reform for many years. We covered her presentation at the Kemp Forum on Exchange Rates and the US Dollar and also her recent paper in the Cato Journal calling for reform. She is an outspoken advocate for sound money and is widely respected by economists around the world. She has also offered concrete proposals on how to bring gold back into the system in creative ways such as by issuing gold backed bonds.

This article will be added to our page of ideas for monetary system reform which offers a variety of ideas and proposals for reform from a broad range of experts. This page is the result of years of effort to collect these ideas in one place with many of the articles including direct input from the experts involved in the various proposals.
Posted by Larry White at 1:00 AM