Readers here know that I have followed Jim Rickards for many years because of his extensive understanding of the issues we cover here and because he has talked about the potential for major monetary system change. That is what this blog was created to watch for.


Jim has written a series of best selling books on these issues and in July 2019 will be releasing the latest one titled "Aftermath".  Jim kindly agreed to do a brief Q&A on the upcoming book which is just below. After that a brief summary will follow. 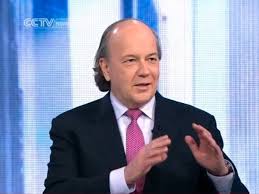 Q: Should readers read your earlier books (Currency Wars, Death of Money, The New Case for Gold, and The Road to Ruin) before they read the new book "Aftermath"?

A: I'm grateful to all of the readers of my books, but there's no need to read them in any particular order. The books are a chronicle of the post-2009 period. There's a lot of economic and monetary history, but they track developments through Bernanke, Yellen and now Jay Powell. There's a cumulative element so reading Aftermath will incorporate many of the points touched upon in the earlier volumes, albeit in shorter form. Hopefully, someone reading Aftermath first will be encouraged to read the earlier books and complete the entire quartet.


Q: What were some main themes you wanted to cover in "Aftermath"?

A: Many of the trends identified in my earlier books have moved much closer to a critical threshold (point of collapse) and so deserved deeper analysis. These include passive investing, robo-investing, Chinese debt, gold accumulation by Russia and China and the role of crypto-currencies in a global monetary reset. Other new themes are the rise of Trump (not covered in the earlier books) and the exact dimensions of life in the aftermath of a new crisis. Currency Wars and The Death of Money warned that a crisis was coming. The Road to Ruin put you in the middle of a crisis and showed the official response function, (which I called "Ice Nine"). Aftermath takes you to the post-crisis environment as a way to show you what you can do now to survive it.

Q: For many years you have consistently forecast that we will some day another major crisis worse than the 2008-2009 crisis and that this could lead to major changes in the global monetary system. While working on "Aftermath", have you seen anything that would cause you to change that forecast?

A: No. All of the trends not only confirm a coming crisis, but suggest it may be worse than I expected. Reaction functions not only include closed banks and exchanges and frozen accounts, but also social unrest possibly requiring martial law. There are also serious infrastructure threats that could involve a collapsed power grid or internet. On top of that, cyber threats are real and cyber wars have already begun. We cover all of these developments in Aftermath.

Q: Do you plan any more books to follow "Aftermath" or will this one complete the series?

A: I expect to write more books, but there's nothing underway right now. After writing five books in eight years, I may just step back and develop new themes or topics. The international monetary quartet (Currency Wars, The Death of Money, The Road to Ruin and Aftermath) is done and stands on its own. I'm not sure how much more there is to say on the topic. It's all there in the books.


Q: Modern Monetary Theory is something new that has gotten a lot of attention lately. Do you discuss that theory in this new book? Do you think MMT will have a significant impact on our monetary future?

Q: Is there anything else you would like readers to know about "Aftermath" or any other topic we discuss here from time to time?

A: Aftermath took longer to write than I expected when I started. That was partly due to other obligations and partly due to an injury I suffered in the summer of 2018 that required some time off for recovery. That said, I'm actually pleased with the publication date, July 23, 2019. That happens to be the exact 75th anniversary of Bretton Woods (July 23, 1944), which is appropriate because the book discusses the need for a new Bretton Woods. Also, it will come out in the middle of the 2020 election season. The book is not overtly political but it does discuss many subjects that will be a big part of the election debate including Modern Monetary Theory, debt and deficits, economic growth and the role of the Fed. Anyone interested in the presidential election cycle will be better informed if they read Aftermath.

Thank you for taking time from a busy schedule to offer these comments as we await the launch of "Aftermath" this coming July. It follows a line of best sellers and I have no doubt that will continue with "Aftermath".

Summary: Jim Rickards has the ability to delve into complex topics in a way that most of us without an academic background in macro economics can easily understand. In the interview above Jim provides us with some interesting tidbits. His new book will include a full chapter on Modern Monetary Theory which is timely since that will surely be debated in the upcoming election cycle. Also, Jim just provided us with an update to his long standing forecast that changes that will impact our present monetary system are coming. Jim often says that forecasts can change over time as new data is received. In this case, he not only says his forecast for a new crisis leading to major change is still in play, he adds that the latest trends suggest to him that the crisis he predicts may be worse than he expected.

Anyone who has read any of Jim's books I think would confirm that they cover a lot ground and that you will learn some fascinating history. I have no doubt that the same will be true for "Aftermath". Readers can find "Aftermath" here.


Added note 5-13-19: With the US-China trade dispute flaring back up, readers may find this recent article by Jim of interest. --  "The Trade War is Back"