Every now and then we need a break from all the serious stuff. Yesterday former NY Yankee Yogi Berra passed away at the age of 90. Most everyone knows Yogi was famous for his ability to turn a phrase in an amusing way. USA Today runs a list of his 50 greatest quotes here. Below are the Top 20 in the list for your enjoyment. 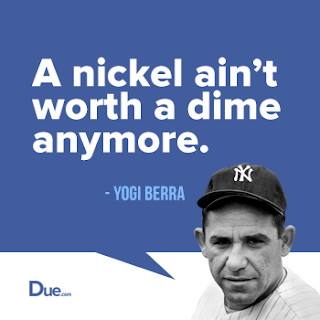 2. You can observe a lot by just watching.
3. It ain’t over till it’s over.
4. It’s like déjà vu all over again.
5. No one goes there nowadays, it’s too crowded.
6. Baseball is 90% mental and the other half is physical.
7. A nickel ain’t worth a dime anymore.
8. Always go to other people’s funerals, otherwise they won’t come to yours.
9. We made too many wrong mistakes.
10. Congratulations. I knew the record would stand until it was broken.
11. You better cut the pizza in four pieces because I’m not hungry enough to eat six.
12. You wouldn’t have won if we’d beaten you.
13. I usually take a two-hour nap from one to four.
14. Never answer an anonymous letter.
15. Slump? I ain’t in no slump… I just ain’t hitting.
16. How can you think and hit at the same time?
17. The future ain’t what it used to be.
18. I tell the kids, somebody’s gotta win, somebody’s gotta lose. Just don’t fight about it. Just try to get better.
19. It gets late early out here.
20. If the people don’t want to come out to the ballpark, nobody’s going to stop them.