Those of us who live in Texas know that we are at risk for tornadoes, just not usually in December. Yesterday we were visited by a rare December tornado (arrived the day after Christmas). We feel very fortunate because no one we know was injured. The EF4 (200+ mph winds) cut a path across Lake Ray Hubbard less than 3 miles from where we live, but we suffered no damage. Others were less fortunate as the Dallas Morning News describes. Our hearts go out to the victims and their families.


Below are some photos of the tornado that were caputured and links to videos. You can see how huge this wedge tornado was and how it stayed down for several minutes in the videos. 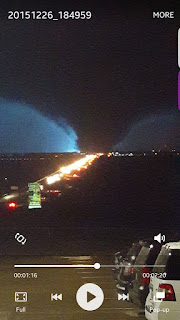 Crossing I-30 (this view looking west towards Dallas) 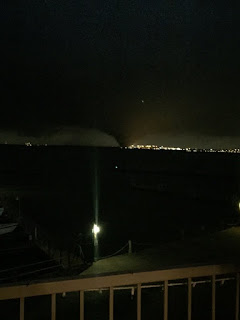 Added note: Disasters like this are always horrible, but also can be inspiring too. In this case there were some heroes who worked to help save some of the people who were hit by the tornado on the Interstate. First responders from all over the area jumped in and volunteered to help out immediately. Within 24 hours they were already making good progress towards restoring normal activity were power was lost, clearing debris, etc. Finally, the local news reported that there were very few reports of looting in the hard hit areas of Garland and Rowlett.  Most people want to help in a crisis. The city of Garland was so overwhelmed with people trying to provide supplies for those in need, they had to thank them and tell them they did not need any more.

"After the perilous weather passed, residents and rescue crews worked frantically — while nearly an inch and a half of chilly rain fell — struggling to help those who hadn’t escaped harm.

“I am so proud of our first responders, including the regular citizens who have helped their neighbors,” Dallas County Judge Clay Jenkins said Sunday."
Posted by Larry White at 4:00 PM