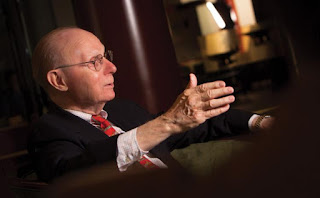 On 15 March, 2014, at 22.24 Robert Pringle wrote:
WHAT WE AGREE ON
It is necessary to agree on many things to have a useful discussion, and it is not surprising we do as my thinking has been much influenced by yours for many years. In a sense I am trying to reconcile my understanding with what I have learnt from Mundell, which is difficult as you have different underlying assumptions and ways of viewing the economy. Never mind, we can cut through the treacherous theoretical minefield to get at practical policy issues we face.
It would be useful to list sometime the big issues on which we agree and why.
I too agree on the need to have a largely voluntary system, with a safety valve as in the gold standard. And market enforcement. But you would need a core of countries to get it going. I do not believe in Hayek’s currency competition – the State has to agree on the definition of the monetary standard, but you can have free competition among producers of money to that standard.
I think you should have the minimal state – in fact tolerate quite a lot of anarchy – politically. But you need a unified currency. Money should not form part of the struggle because it is a zero sum game and because any central bank or money creating centre is always controlled by powerful  groups, as today. (I fear crony capitalism is a mortal threat to democracy, especially in the US; see Luigi Zingales’ book “A Capitalism for the People: Recapturing the Lost Genius of American Prosperity,” .) The trouble is Republicans tend to have a knee-jerk reaction whenever banks are criticised. Breaking up the banks and defending the US constitution against crony capitalists should be central to the Republican agenda. (You probably deal with that in your book , Why Capitalism?, which I must re-read).
Of course there will always be competition and fights over resources, territory, positional goods, gold, intellectual property.  But as in the Roman Empire you can have this take place within a common monetary area where the definition of money does not form part of the struggle.
The public learnt in 1950-75 that pre-election booms were likely to end in busts and to accept the attempt to make central banks independent. This was a step in the right direction. I know it is likely to fail as central banks abandon rule-based policies in favour of policies that suit powerful groups, but it shows progress in this direction is possible.
IF WE HAD A PLAN…
People can likewise learn that the power to devalue brings short-term gains to employment but has bigger long-term costs. EMU has been a setback, so far, and a public relations disaster for currency areas/monetary unions of all sorts. We know the reasons. They can be fixed, especially if applied at the world level.
Of course it is true by definition that (as Larosière says) nations are “not ready’ to abandon the pretence of national autonomy – if they were it would already have happened.  But suppose that the next crisis brings unemployment to 20%, further financial chaos, leading to nationalisation of the finance industry, extreme controls on personal freedom, state-directed investment, restrictions on travel and capital flows. And imagine that there is a plan to jump to a world money where we could have freedom in all these respects and restore capitalism  IF governments accepted limitations of national sovereignty –  and if there is a good plan ready – we would have a chance of selling it to a desperate world. And I think there WILL BE another worse crisis!
My reading of the Bretton Woods agreement is that it was pushed through by a few determined people who grasped a unique opportunity – there was nothing inevitable about it.
Of course would be delighted to have this in the form of a public conversation – honoured indeed.
I had a lovely talk with Paul Volcker in public last night. It has been posted on Central Banking’s website.
Robert
PS I attach a new paper on international money by Jacques de Larosière (to be published by Central Banking in a forthcoming issue).

The comment in the email above is the reason. The potential for another major crisis that could prompt monetary system change is taken quite seriously by experts around the world (please note how similar Robert Pringle's comments on the impact of  a new crisis are to Jim Rickards). These experts regularly discuss and exchange ideas on how to reform the system if and when something does prompt major change.

I believe that the average person like myself needs to take the potential for major change seriously as well and that it is a good idea to learn about various proposals that might be considered to reform the present system (like we presented in this article). That is the purpose of this blog and why I will continue to monitor events until it becomes clear that events leading to major system reforms are in progress or that they are unlikely to take place any time soon. Right now I suspect that will be clearer by mid 2018.

The links at the upper right hand corner of the blog (systemic risks & SDR information) will always remain available to anyone interested in some background on these issues regardless of how events unfold as long as Google Blogger stays online. They contain input from some of the best experts in the world on this topic as well as links to some of the various ideas out there for major system reform.

Added note: I want to add a word of thanks to Robert Pringle for his willingness to take time from a busy schedule to reply to my questions by email and to alert me to this kind of useful information (like these email exchanges). Mr. Pringle is a well respected expert on central banking having Founded Central Banking Publications and having been a former Director of the Group of 30. He has been very kind to keep me in touch with monetary system issues discussed around the world and offer his ideas on the status of the situation.
Posted by Larry White at 7:18 AM