A New and Improved Blockchain?

Last summer we were happy to publish an in depth look at the Bitcoin/Blockchain technology written by one of the leading payment systems experts in the world. Interestingly, since that time the concerns about the technology that our expert pointed to have surfaced in the Bitcoin community.


IBM and Microsoft Will Let You Roll Your Own Blockchain


"In late December, several big-name companies from across both the tech and financial industries—including IBM, JP Morgan, Wells Fargo, and the London Stock Exchange—unveiled a new open source software project based on the blockchain, the global online ledger that underpins the bitcoin digital currency. The project aims to build blockchain-like software that can more efficiently, reliably, and openly track the exchange of financial assets, including stocks, bonds, futures, houses, and car titles. And considering the names involved—particularly the Depository Trust & Clearing Corporation, or DTCC, which oversees Wall Street’s stock settlement system—it’s an enormously significant undertaking.

Unlike the blockchain itself, the Hyperledger software isn’t battle-tested. In fact, it’s still being built. But on Tuesday, IBM unveiled a new cloud computing service that lets anyone kick the proverbial tires on this fledgling technology."

"Last year, researchers under Krishna began building an alternative to the blockchain. And after Krishna and others helped bootstrap the Hyperledger project—which operates under the aegis of the not-for-profit Linux Foundation—IBM donated its code to this open source effort. Others have donated additional code, but it appears that IBM’s contribution will serve as the foundation of the project."

Why Wall Street Is Embracing the Blockchain—Its Biggest Threat

"Some view this kind of talk with skepticism. Galper says that the stock loan market isn’t as broken as Byrne would have us believe, and that the idea of issuing stock over the blockchain is still hard to judge. Certainly, the blockchain doesn’t operate fast enough today to drive the high-speed trading of the public stock market."

Tech and Banking Giants Ditch Bitcoin for Their Own Blockchain

"SEVERAL MAJOR COMPANIES from across both the technology and financial industries—including IBM, Intel, and Cisco as well as the London Stock Exchange Group and big-name banks JP Morgan, Wells Fargo, and State Street—have joined forces to create an alternative to the blockchain, the global online ledger that underpins the bitcoin digital currency." 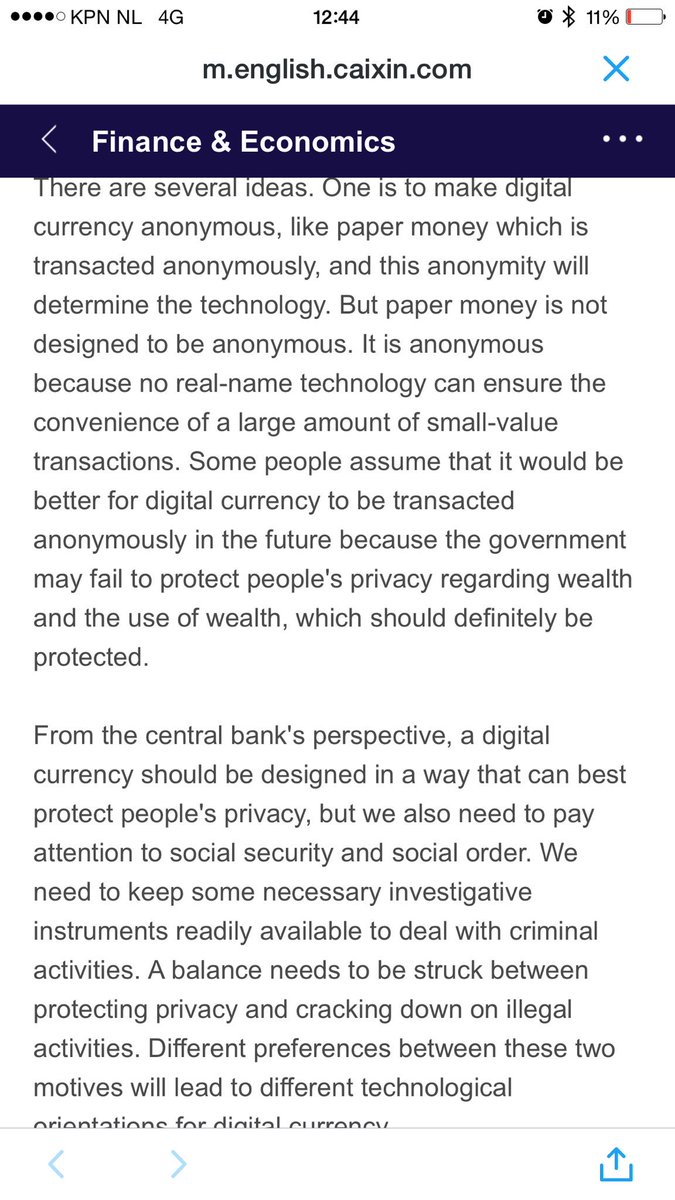 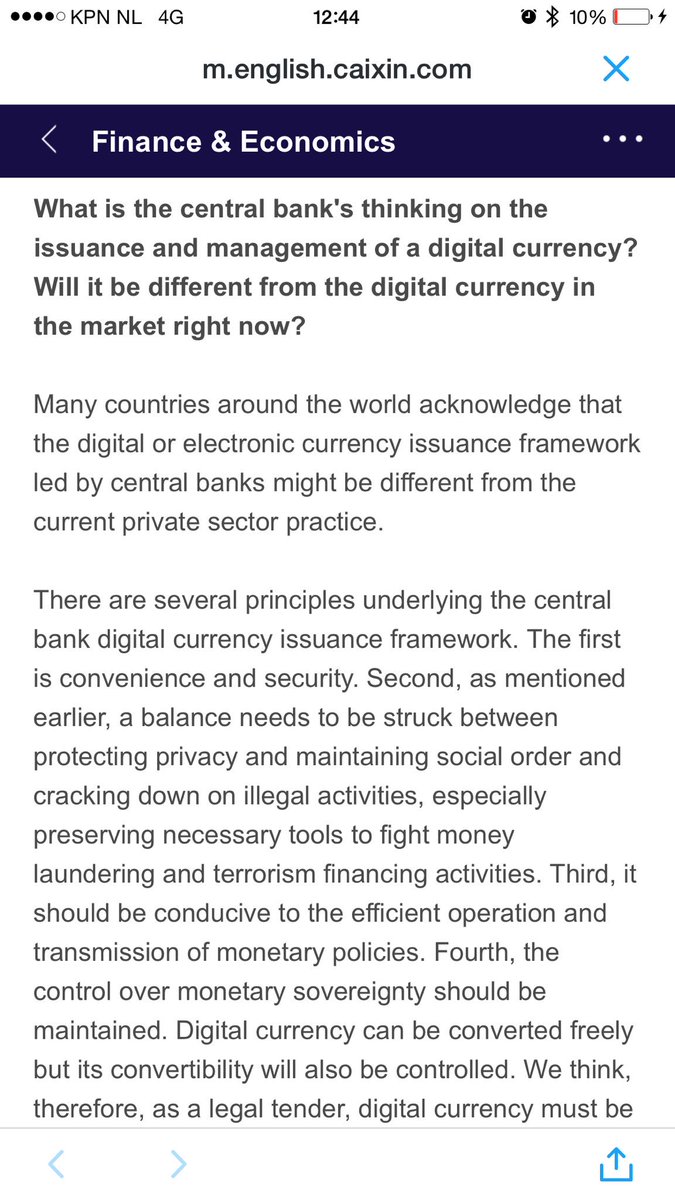 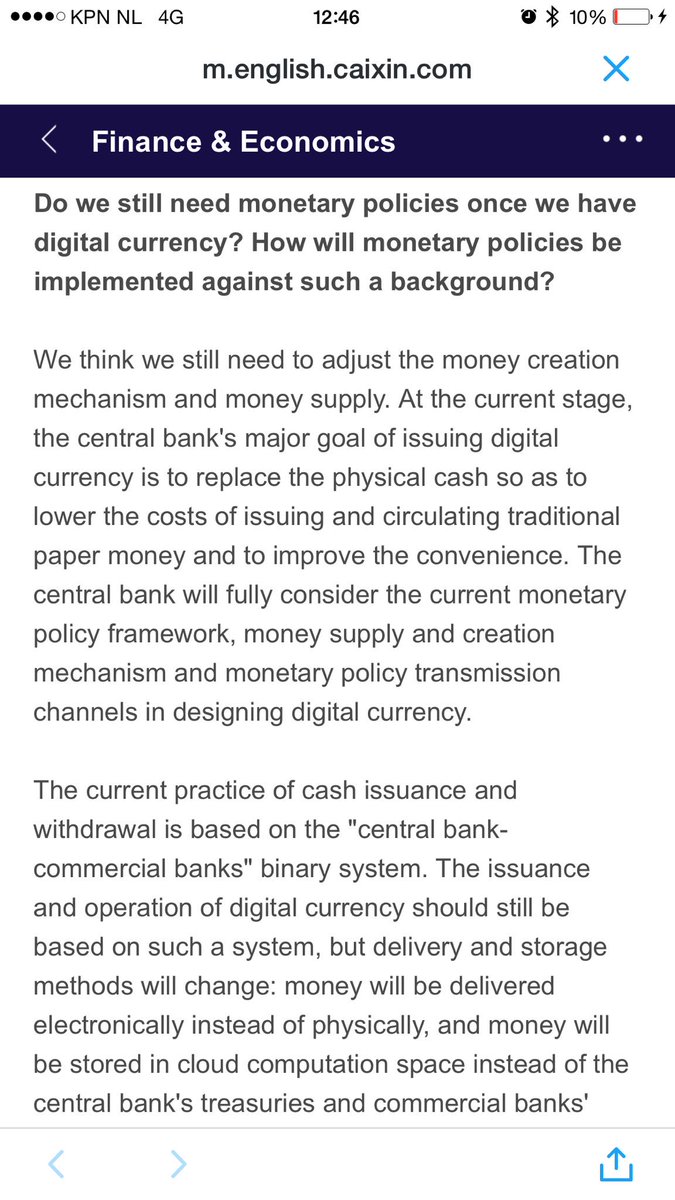 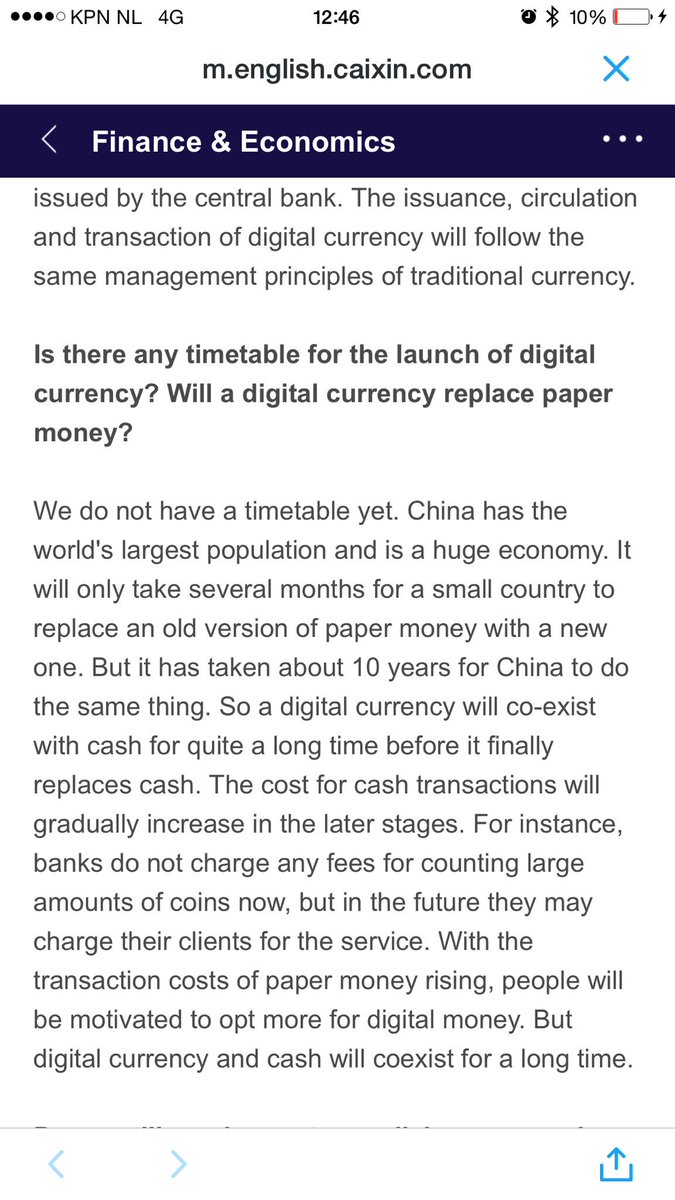 Direct link to interview with PBOC Governor Zhou Xiaochuan and below are some key Q&A's on a digital currency future at the PBOC (China). I will do a separate blog article later on this interview:

The digital yuan
The PBOC held a seminar on digital currency on January 20, saying that the central bank will try to launch its own digital currency as soon as possible. What are the considerations behind this?
The PBOC has studied digital currencies for a long time. History shows that currency has evolved abreast of technological advances and development of economic activities. The evolution from early-stage physical currency and commodity currency to the later credit currency was a result adapting to the development of commercial society. Paper money, as the last generation currency, lacks high-tech support, and it is an irresistible trend that paper money will be replaced by new products and new technologies with greater security and lower costs. With the rapid development of the Internet and the significant changes in the global payment systems, it is necessary to establish the issuance and circulation system of digital currency, which will help build the financial infrastructure and improve the quality and efficiency of the economy.
How can a digital currency replace paper money? There are several ideas. One is to make digital currency anonymous, like paper money which is transacted anonymously, and this anonymity will determine the technology. But paper money is not designed to be anonymous. It is anonymous because no real-name technology can ensure the convenience of a large amount of small-value transactions. Some people assume that it would be better for digital currency to be transacted anonymously in the future because the government may fail to protect people's privacy regarding wealth and the use of wealth, which should definitely be protected.
From the central bank's perspective, a digital currency should be designed in a way that can best protect people's privacy, but we also need to pay attention to social security and social order. We need to keep some necessary investigative instruments readily available to deal with criminal activities. A balance needs to be struck between protecting privacy and cracking down on illegal activities. Different preferences between these two motives will lead to different technological orientations for digital currency.
What is the central bank's thinking on the issuance and management of a digital currency? Will it be different from the digital currency in the market right now?
Many countries around the world acknowledge that the digital or electronic currency issuance framework led by central banks might be different from the current private sector practice.
There are several principles underlying the central bank digital currency issuance framework. The first is convenience and security. Second, as mentioned earlier, a balance needs to be struck between protecting privacy and maintaining social order and cracking down on illegal activities, especially preserving necessary tools to fight money laundering and terrorism financing activities. Third, it should be conducive to the efficient operation and transmission of monetary policies. Fourth, the control over monetary sovereignty should be maintained. Digital currency can be converted freely but its convertibility will also be controlled. We think, therefore, as a legal tender, digital currency must be issued by the central bank. The issuance, circulation and transaction of digital currency will follow the same management principles of traditional currency.
Is there any timetable for the launch of digital currency? Will a digital currency replace paper money?


We do not have a timetable yet. China has the world's largest population and is a huge economy. It will only take several months for a small country to replace an old version of paper money with a new one. But it has taken about 10 years for China to do the same thing. So a digital currency will co-exist with cash for quite a long time before it finally replaces cash. The cost for cash transactions will gradually increase in the later stages. For instance, banks do not charge any fees for counting large amounts of coins now, but in the future they may charge their clients for the service. With the transaction costs of paper money rising, people will be motivated to opt more for digital money. But digital currency and cash will coexist for a long time.