BRICSPOST: China - IMF Talks Underway to Get the Yuan in SDR Basket

Here is the latest evidence that what China really wants is to get the Yuan included in the SDR currency basket later this year. There are many who are speculating that China intends to leave the IMF and back the Yuan with gold to compete with the US dollar. However, this BRICSPOST article continues to confirm that is not what China prefers to do. Below are quotes from this new BRICSPOST article and then some comments: 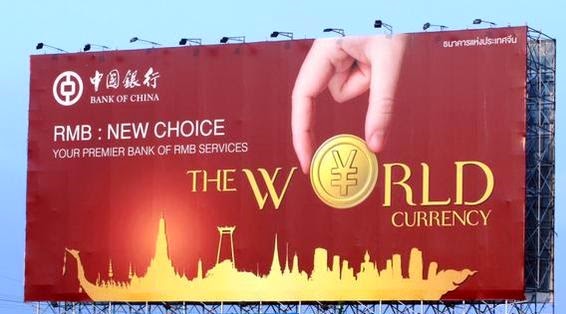 A senior Chinese central bank official said Thursday that the country is “actively communicating” with the IMF on the possibility of including the yuan, or RMB, in the basket of the Special Drawing Rights (SDRs).
Including the yuan in the SDR system would allow the IMF to recognize the ascent of the world’s second-biggest economy while aiding China’s attempts to diminish the dollar’s dominance in global trade and finance.
“We hope the IMF can fully take into account the progress of RMB internationalization, to include RMB into the basket underlining the SDR in foreseeable, near future,” said Yi Gang, vice governor of the People’s Bank of China.
However, China will be patient until conditions are ripe, Yi said at a press conference on the sidelines of the ongoing annual parliamentary session."
.  .  .  .  .  .
"To become a currency included in the SDR basket, the trade volume of goods and services behind that currency will be evaluated, the Chinese Central Bank official explained on Thursday, stressing that RMB has no problem in this regard. But he said views are divided on whether the RMB is a freely usable currency.
“No matter whether and when the RMB will be included in the SDR basket, China will push on with its financial sector reform and opening-up,” Yi said."
-----------------------------------------------------------------------------------------------
My added comments:
This BRICSPOST article clearly confirms what we have been reporting here on the blog. The moves being made by China to "internationalize" the Yuan are intended to meet the IMF requirements to have the currency added to the SDR basket. In this article, Chinese officials are directly quoted as saying this is their goal.
In fact, they even say they are willing to be patient if the IMF does not include the Yuan in the SDR basket this year. The vice governor of the PBOC says "no matter whether and when the RMB will be included in the SDR basket, China will push on with its financial sector reform and opening-up." This means they are devoted to staying in the IMF and eventually meeting the criteria for inclusion in the SDR basket even if it takes longer than this year.
Does this sound like China is about to leave the IMF, back the Yuan with gold, and then try to displace the US dollar on its own? No, it doesn't. It does support Jim Rickards view that China is buying gold in order to build up its reserves for a monetary reset at some date in the future that is likely to be undertaken within the IMF.
Also, the fact that China may not be interested in going it alone to back the Yuan with gold does not hurt gold's longer term prospects. There are solid reasons to own gold (and/or silver) in a portfolio as Rickards points out in this new article out today. It makes sense to have some as an insurance policy for the future.
It's always possible that China might change direction, abandon the IMF, and back its currency with gold on its own. If evidence surfaces to support that view, we will cover it here. But for now, the available facts just don't support that theory.
Posted by Larry White at 9:51 AM