Changes Coming in Food Production - Off Topic But Interesting

This is one of those off topic news items we run on here now and then. It talks about possible changes coming in the way food is supplied. Some will like it and some won't I am sure. Below are a few quotes from this CNBC artricle on Sustainable Foods.


Up the road in San Francisco, Josh Tetrick, a former college linebacker and Fulbright scholar, insisted that his three-year-old food company,Hampton Creek, which uses a laboratory-born egg substitute to make mayonnaise and cookies, "is not about reaching out to health-conscious consumers.   . . .

Although this pair of CEOs are vegans, they're adamant about not preaching veganism or vegetarianism to the masses. Instead, they say they are part of the sustainable food movement, which includes the existing spate of soy-based meat substitutes as well as organics and free-range animals.
They're among a growing group of global leaders who are making it their business to confront the dramatic growth of the world's population, estimated to exceed 9 billion by 2050, which would require raising overall food production by at least 70 percent, the FAO reports. A huge burden on the planet's livestock, land, water and other resources.
Click here to read the full article 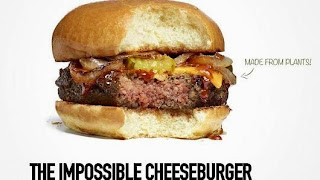