The National Center for Policy Analysis sponsored an appearance in Dallas by Jim Rickards to discuss the ideas and information he has presented in his best selling book "The Death of Money".

The NCPA used this speech to kick off a new "Financial Crisis Initiative" which hopes to bring more awareness of monetary system issues to the general public. Since this blog is devoted to that very same goal, it is natural that I wanted to be able to cover this speech in person and provide a summary here for readers.  Below is a bullet point summary of the speech and the Q&A session that followed.

-Why do policy makers not see the risk of another big financial crisis? Are they dumb? No, they are brilliant. That's not the explanation.

-Jim thinks the problem is that the risk models they use are in error and based on simple bell curves that assume we have an equilibrium based system (like a clock that you wind up). The bell curve assumes that an extremely severe crisis event is very unlikely (perhaps a one in 3 billion years event)

-Jim thinks these models built on bell curve equilibrium assumptions are wrong and are why the policy makers will not see the next big crisis coming before it hits.

-Jim (and a few others) have started to advance a new theory for capital markets based on complexity theory that is used in other fields of advanced study. He thinks this model better explains behavior by people in capital markets and will change the way economists think over time (we'll cover that more in Part II tomorrow)

-Jim says there are four features of any complex system:

1) Diversity - different points of view (like bulls and bears in a market)
2) Connectivity - participants communicate with each other and are not in isolation
3) Activity-Interaction - people are doing things that impact each other (investing, saving,etc)
4) Adaptation - what other people do impacts behavior (herd mentality, etc)

- Jim says that the capital markets have all of these features and that this makes them a complex system. He thinks trying to analyze a complex system using simple bell curve based models leads to inaccurate forecasting by the Fed and other leading economists. He says a complex system makes an extreme event much more likely to happen sooner than if you use the traditional bell curve. He says if you are using the wrong model, you will get the wrong results every time.

- He thinks his view will become the norm in the coming years but that change happens slowly; so policy makers will still be using the old, inaccurate models when the next crisis arrives.

Question 1) Jim was asked to comment on whether the IMF will include the Chinese Yuan later this year in the SDR basket of currencies.

Jim responded to this question by providing some basic information about the IMF and how they use SDR's like a currency unit. He said that what people need to understand about SDR's is that they are a fiat type currency unit backed by nothing tangible the same as the US Fed creates US dollars. The difference is that SDR's are not available to the general public and are only used by nations or central banks. They are an "internal" form of currency unit managed at the IMF trading desk. Nations can exchange SDR's for actual national currencies like US dollars, Euros, etc. to buy real things.

Jim then said that he thinks the goal is to include the Yuan into the SDR basket later this year. He said the IMF/US were using China's desire to include the Yuan to get China to make some changes to open up their system more. He said China is buying gold in mass amounts in order to get the IMF/US to accept the Yuan into the SDR basket. He does not think China has the intent to go it alone with the Yuan as a new gold backed world reserve currency (something we have also said here on this blog).

Here is something new he added on the stalled IMF reforms that China wants approved that would increase their voting power at the IMF. Jim said that the US White House wants to make it appear that the US Congress is the hold up on this, but that the White House itself is actually slow playing this in order to get more concessions from China. He says the White House could get these reforms approved very quickly if they really wanted to.

This is something new from Jim and is quite significant if you have been following this issue. If Jim is right on this, it means that the IMF reforms will get approved AFTER China makes the concessions that the White House wants to see. He thinks that will happen eventually so that the IMF will be ready to act when the next big financial crisis hits.

Another new tidbit Jim added here is that he thinks the IMF could easily issue $5 Trillion or more in new SDR's when the next big financial crisis hits. They will have to in order to keep the system going because all the numbers will be bigger than the 2008 crisis. He added that the IMF did a trial run of issuing new SDR's in 2009 to test out the ability to add more when needed. He said adding $5 Trillion or more new SDR's would create massive inflation.

Question 2) Jim was asked if the monetary system changes he predicts (the end of the US dollar as sole reserve currency and eventual replacement by the SDR) will happen suddenly or over a long time frame.

Jim answered this by saying that the elites who run the current financial system prefer that the change comes slowly and steadily over a period of many years so that the public does not really notice the change taking place. As an example, he says that you can devalue the dollar 3% a year over 20 years. That cuts it more than in half, but most people don't realize that is happening because the process is slow. He thinks that is how the elites prefer to make the changes he sees coming.

He then goes on to say that he thinks they will not be able to do it over a long time frame because the next big financial crisis (that the elites won't see coming) will force them to make changes much more quickly (in weeks or months). He does not know when the next crisis will hit, but notes that we are now over 6 years since the last big crisis and the system is complex and unstable. He feels that we are looking at a time table of not more than 2-3 more years for the next big crisis (but it could happen at any time). He gave the year 2018 as an example possibility.

Jim added that he thinks China has setup the new AIIB and BRICS banks as fallback plans in case the IMF/US does not give them more influence at the IMF (and include the Yuan in the SDR basket). He thinks the Yuan will likely get added this fall. I will add that he has told me by email that he would not be surprised if some other currencies get added in as well (Australia for one example). Jim also said he thinks China will announce later this year that they have at least 4,000 tons of gold reserves. He said that may well be too conservative an estimate of their gold reserves.

Question 3) Jim was asked what the average person can do to prepare for all this.

He responded to this question by saying that this coming crisis is going to be different than anything we have dealt with before. He said investing now is much trickier because we are "on the knife's edge" between inflation and deflation. Usually, investors can plan for extended inflation or extended deflation. In our current situation, he thinks we could easily go into a major inflation or deflation environment very quickly. In fact, he says we could experience both if a major deflation leads to a policy response that then leads very quickly into inflation.

The point being that investors have to be prepared for either outcome and use what he calls a "bar bell' plan. This means holding some hard assets like gold in case the inflation scenario gets out of control and holding 10 year Treasury notes and cash to hedge against deflation. He says his cash might get converted into hard assets quickly if the deflation leading to inflation scenario were to unfold. It's important to stay alert and nimble.

This pretty much sums up the speech and the Q&A session. Most of what Jim said here will be familiar to long time readers here, but please note the new tidbits I put in bold type above.

In Part II, I want to discuss Jim Rickards as a missionary for his new way of thinking. When you listen to him speak in person, you quickly realize this is not just a hobby or just a book tour to promote sales. Jim has spent a lot of time working on new ways of thinking about economics that he believes will challenge the current paradigm in years to come.It is clearly important to him to introduce these ideas to the public alongside trying to get people to prepare for any coming crisis we might see. 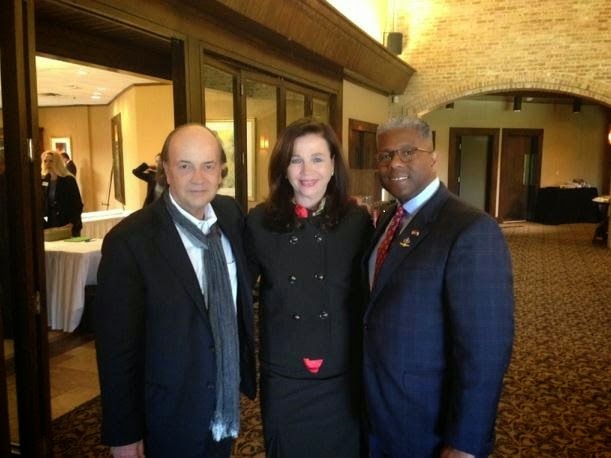 Jim in Dallas with his cousin and former Congressman Allen West

Added note 5-5-2015: A note of thanks to Ed Steer who for mentioning this article in his Gold & Silver Daily column. I did get a chuckle from this comment:

"The Q&A answer session is the only part worth reading in my opinion and, for whatever reason, it's stuck on the end of Part 1.  It has to do with China, SDRs, IMF and gold."

It fits in with what I was saying about how most people are not interested in the academic foundation for Jim's forecasts. Since this blog is geared towards the average person I do get that. But it doesn't hurt to think about issues on a higher level now and then and that part of this speech was interesting to me.

Just for clarity, the reason the Q&A answer session was "stuck on the end of Part I" is because the article is a summary of the speech which was followed by the Q&A session. The article just reported the event as it was presented to the audience. The NCPA who sponsored this speech advised me that it will appear online.

I do agree that the Q&A session was interesting with the only problem being that there was only time for three questions. Anyway, I always appreciate it when articles here are mentioned elsewhere.
Posted by Larry White at 6:49 AM