Checking in on the US Dollar and Gold

When the USD index fell below 95 it broke through the strong uptrend line in place since July 2014. We can also see that the index has fallen below both the 50 day and the 100 day moving averages (blue and green lines). These are all warning signs that the dollar may have peaked out. If that is true, the dollar could fall back down to the 80 level where it started the strong up move. The chart indicators show that right now the dollar is somewhat oversold and should rally back up some. A key to watch will be if the dollar can manage to get back above the 95 level (where it fell through the uptrend line). If the dollar is unable to rally back above that level, it could be headed quite a bit further south later this year. If it breaks below the 200 day moving average (red line), it would likely pickup downside momentum. Since a weak dollar is one prediction related to potential monetary system change, we need to keep an eye on it. 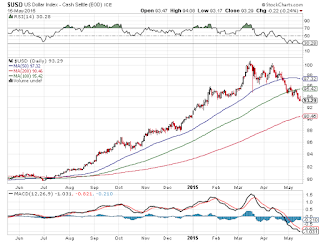 One other note in regards to gold in relation to the US dollar. When the dollar started its strong move up last July, gold was trading at around $1320-1340 as we can see from the chart below. As we would expect gold did pull back as the dollar moved up. However, gold did not fall nearly as much as it normally does in relation to the amount that the dollar moved up as we noted in this earlier blog post. Even if you use an inflation adjusted gold price, gold was around $450 the last time the US dollar index was around 100. This time gold was well above $1000 when the US dollar index hit 100. Also, gold actually had a pretty strong rally earlier this year (Jan-Feb) even though the dollar was not dropping significantly at that time.

What this means is that gold has actually held up very well during a massive move up in the US dollar (while also doing well versus other major world currencies as we noted here). If the dollar does drop all the way back down to the 80 level, it suggests that gold will be quite a bit higher than the $1340 price level this time around. The key will be if the dollar rallies back up again or falters (at around 95) if it tries to rebound from its recent slide.

All this is worth watching. If gold makes a big move higher and the dollar drops sharply, it indicates something is not going well in the financial system that we may not know about yet or that markets are anticipating higher inflation. If the dollar stabilizes and gold fails to stage a significant rally, it suggests that things are probably under control. If the dollar were to rebound and soar back over 100, that would suggest a major deflation event. 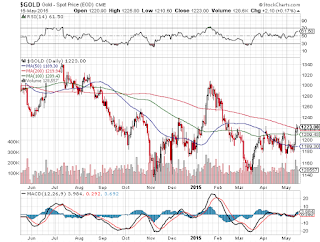